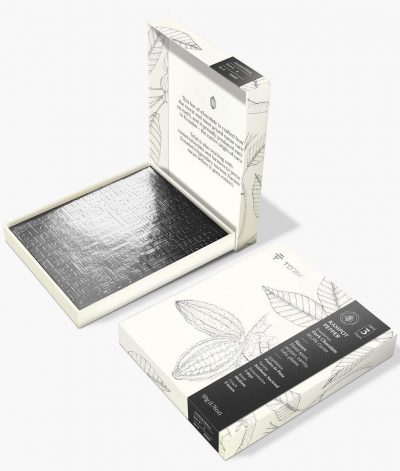 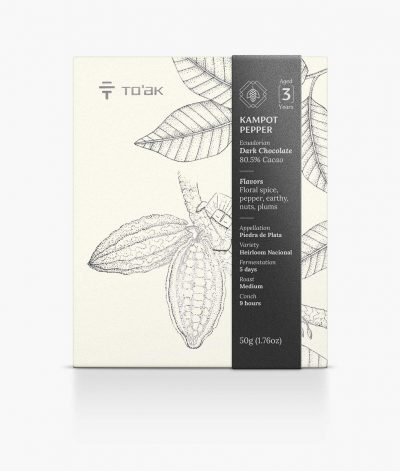 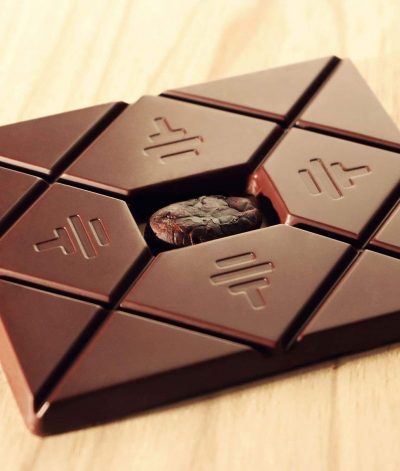 The world’s most celebrated pepper, from the Cambodian province of Kampot, meets the world’s most luxurious dark chocolate, from To’ak in Ecuador—aged for three years. A bold and floral chocolate with an artful touch of spice. Ideal for pairing with cheese, tequila, or rye whisky. Sample of Kampot pepper is included.

Only registered business can order via this webshop.

This is a good edition to pair with añejo tequila–Casamigos actually works better than most other tequilas for reasons we’re still trying to figure out. Rye whisky is another spirit that is well-suited to this edition, although a broad range of whiskies also work very well. With cheese, don’t worry about finding a spicy cheese. Instead, go with something like Gruyère, Compté, aged Gouda, or Pyrenees sheep cheese, and let the chocolate itself bring its own spice to the pairing.

In ancient times, chocolate was considered sacred and noble. Then in the industrial era it was commodified and mass-produced. To’ak is working to restore chocolate to its former grandeur and push its boundaries to new horizons. Its mission is to transform the way the world experiences dark chocolate, elevating its making and tasting onto the level of vintage wine and aged whisky.

To’ak sources its chocolate from the extremely rare Ecuadorian cacao variety called “Nacional,” which traces its genetic lineage back at least 5,300 years—to the earliest-known cacao trees domesticated by humanity. In the 19th century, Nacional cacao was considered by many European chocolatiers the most prized cacao in the world. Then in 1916, an outbreak of Witches’ Broom disease decimated Nacional cacao throughoutEcuador. By the dawn of the 21st century, this famed variety was believed to be extinct. In the valley of Piedra de Plata, To’ak found old cacao groves where some of the last survivors continue to grow. These 100-year-old trees have been verified by DNA analysis to be 100% pure Nacional, and have since received the prestigiousHeirloom designation by the Heirloom Cacao Preservation Fund.

To’ak’s chocolate is highly terroir-driven and, in some cases, it is aged like whisky. Each bar is presented in a handcrafted Spanish Elm wood box that has the individual bar number engraved on the back.The box includes proprietary tasting utensils and a 116-page booklet that tells the story of its provenance and provides a guide to dark chocolate tasting. From earth to tree to bean to bar, To’ak chocolate is produced entirely in Ecuador. Editions are strictly limited, typically to as little as 100 bars. To’ak’s flagship edition was aged for four years in a French oak cognac cask and retails for $385 per bar.

To’ak’s co-founder Jerry Toth moved to Ecuador in 2006, where he co-founded a rainforest conservation foundation called Third Millennium Alliance. The forest preserve that Jerry co-founded is located in theEcuadorian province of Manabí, which is to cacao what the French province of Burgundy is to wine. As part of his conservation work, Jerry spent several years cultivating an organic fruit tree orchard that features cacao trees inter-planted with over fifty different species of other tropical fruit trees. Secluded in the middle of the forest, he began making chocolate by hand in a thatched bamboo house without electricity. After years of honing his passion, Jerry linked up with co-founder Carl Schweizer and fourth-generation Ecuadorian cacao grower Servio Pachard. They formed a partnership with fourteen cacao growers in the remote valley of Piedra de Plata, where some of the last-known pure Nacional trees still survive.

To’ak chocolate has been featured in Forbes, L.A. Times, Wine Spectator, Fortune Magazine, TheGuardian, Huffington Post, Süddeutsche Zeitung, TV channels such as BBC, CNBC, CNN, and FOX, and over a hundred other publications across five continents. The Restaurant at Meadowood, one of only 12 restaurants in the U.S. to earn Three Michelin Stars, features To’ak chocolate in its signature desserts.

To’ak works hand-in-hand with a small group of cacao growers in Piedra de Plata and pays them the highest price per pound in Ecuador. All wood used in To'ak's packaging is personally replenished through the planting of native hardwood trees by the entire To’ak team in partnership with the Ecuador-based rainforest conservation foundation Third Millennium Alliance. To’ak also donates 1% of its sales to Third Millennium Alliance as part of the global philanthropy movement 1%for the Planet. To’ak is working with local farmers, conservationists, and multiple universities to protect the world's oldest and rarest variety of cacao and nurse it back from the brink of extinction.     Contact: James Le Compte ([email protected]) & Dennise Valencia ([email protected]). Please visit https://toakchocolate.com for more information.

We charge a fixed fee for shipping (figures exclude VAT): We do not arrange transportation for orders to customers outside the EU, these need to arrange shipping themselves. In case you wish to book your own transport, you can indicate this at checkout. We then do not charge shipping- or order costs.

Payment can be settled on account (invoice), by iDeal (the Netherlands) or Credit Card. For shipments outside the Netherlands we ship only after receipt of the payment in full.

The invoice for your order is send my email when the order is processed and shipped.

We ship by DPD. DPD usually deliver within 24 hours (within Holland and Belgium). For other countries the lead-time is about 2-3 days. After your order is processed and ready to ship you will receive a notification by email, detailing the scheduled delivery date and a Track & Trace code.

Attention: the date format on all American packaging is as follows: MM-DD-YY (the month first, opposite to what is custom in Europe). American artisanal chocolate makers normality give 12 months from date of production. Chocolate which we supply you with has a Best By Date of minimum 4 months. We discount and clear all product with a shorter Best By Date.
*required
Copyright ©2014-2020 THE HIGH FIVE COMPANY