Hogarth Craft Chocolate is born out of a passion for chocolate, craftsmanship and art.

Hogarth source the highest quality cacao beans from around the world to create small batches of chocolate using traditional techniques. Their small factory is located in Nelson, New Zealand where theysort, roast, crush and classify, winnow, grind and conche, age, melt, temper, mold, and wrap all by hand.

The process uses minimal ingredients and is focused on preserving the natural flavours within the cacao to create a chocolate with a true cacao flavour, a flavour lost in industrialised processing.

Together with Ana Aceves of Sugarcube Studios they developed a chocolate bar and packaging design which illustrates Karl’s journey from sailor to chocolate maker, and the voyage the cacao takes to reach our distant pacific island.

Karl Hogarth started a life at sea at the ripe old age of 16, straight out of school he went fishing. Working his way up the ranks he became a skipper of his own trawler by 26, often taking 3 week voyages out into the Pacific, 4 days “steaming” away from the nearest land, or down to the Auckland Islands deep in the Southern Ocean, working in atrocious sea conditions with nowhere to shelter. After 20 years of battling the oceans he hung up his sea boots to take a course of study, gaining a business degree in 2007.

Shortly after university he embarked on a long overdue OE which took him through Indonesia, Malaysia, Thailand and continued through Mexico, South and Central America. During this trip he had two life changing experiences, he met (soon to be wife) Marina in Buenos Aires and he “discovered” cacao in Guatemala.

With both he thought…where have you been all my life? …..and why haven’t we met before?

Trying real cacao for the first time got Karl thinking about how chocolate is made and where it comes from. He started to investigate and soon found how to make chocolate at home.

YOU MEAN I CAN MAKE CHOCOLATE AT HOME???

Yes, you can, and he did… lots of it! After a year living in Buenos Aires Karl and Marina, now married, found they needed to move to New Zealand for Karl’s work. He had to return to the sea this time as an officer aboard ships in the oil industry. When he was home he was making chocolate in his shed, surprisingly good chocolate and more than they and their friends could eat!

Soon the toll of being away from his family for over half a year was wearing them down, their first daughter was born (Rose) and being away for so long simply wasn’t sustainable. Karl was looking for a new vocation, but he knew it had to be something he was passionate about….

It seemed like a crazy idea at the time, but they decided to build a chocolate factory, make and sell chocolate. Together they sketched out what was to become HOGARTH CHOCOLATE MAKERS…

Now they both run the business together while raising a family.

Hogarth is available from stock: lead-time is 1-3 days. 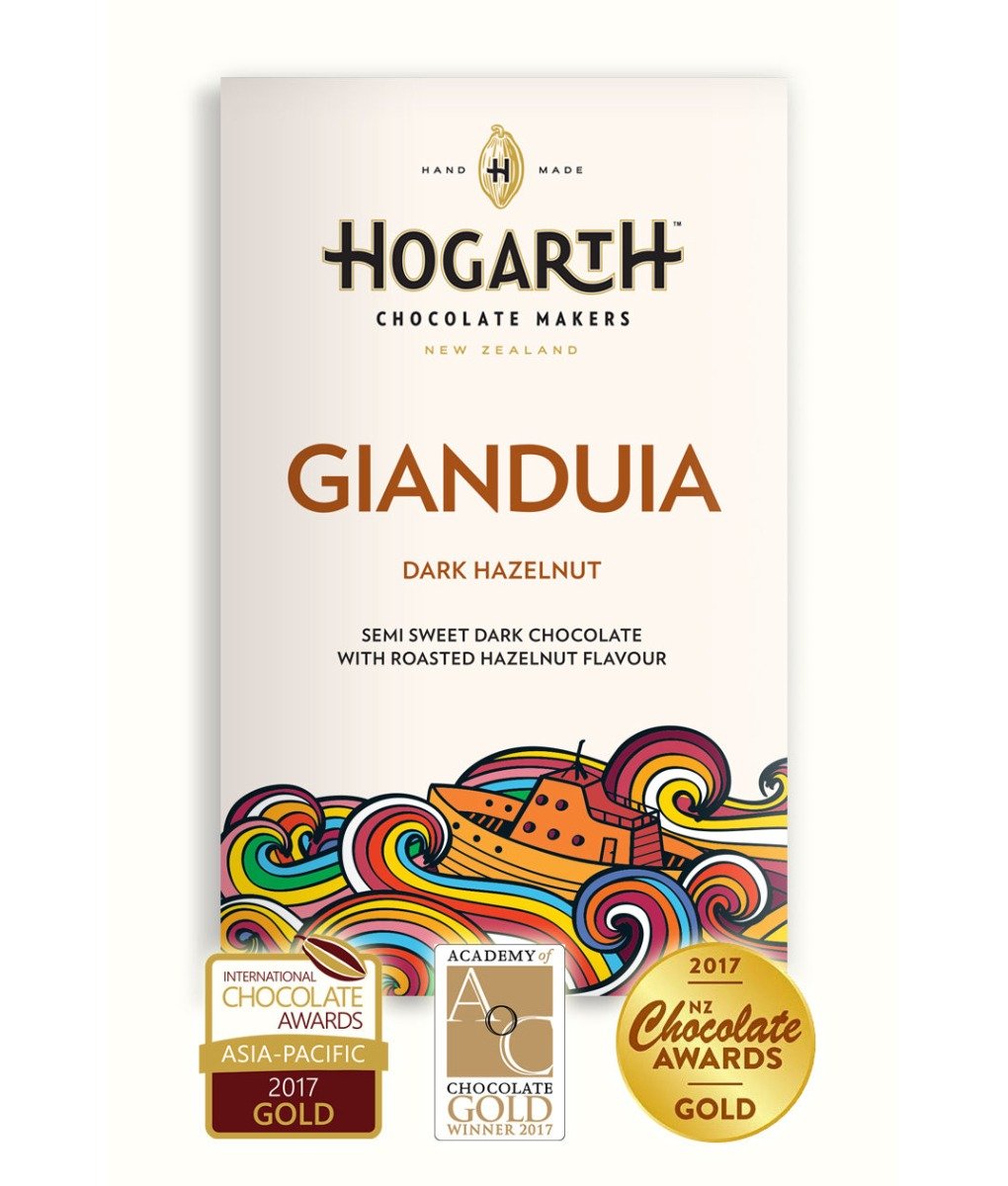 Gianduia is a soft hazelnut chocolate, smooth and velvety due to the hazelnut oil lowering the melting temperature of the chocolate. The resulting experience is a silken mouth feel and lingering roasted hazelnut flavour.

The original Gianduia came from northern Italy. Legend tells us that cocoa supplies were limited during the Napoleonic Wars so a chocolate maker in the Piedmonte region added roasted hazelnuts to supplement the cocoa, and Gianduia was born. 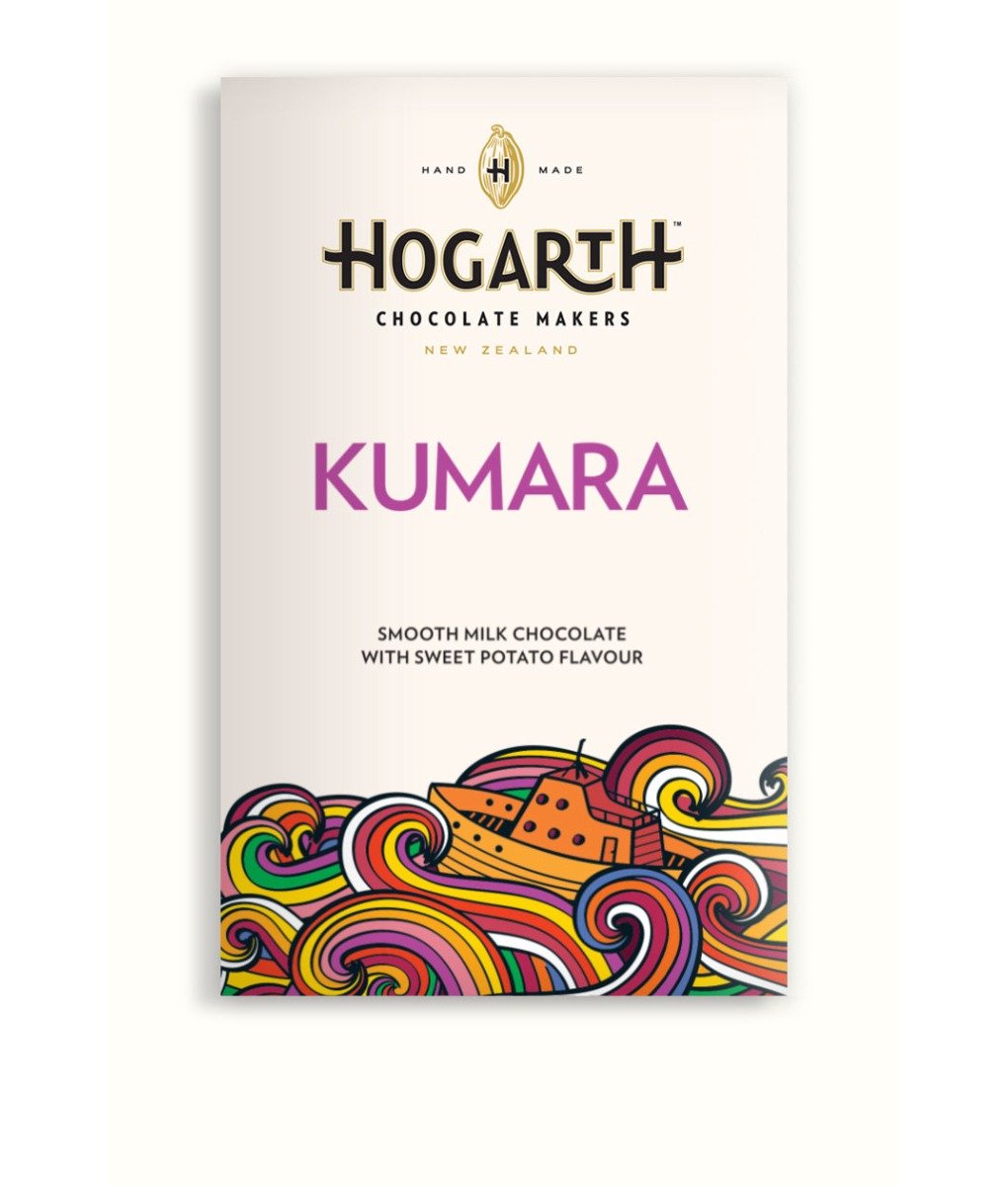 Like Cacao, Kumara originally came from South America, travelling west across the Pacific after being traded through the islands and landing in Aotearoa (New Zealand) with Maori.

Hogerth have paired the Kumara with their Peruvian criollo cacao which highlights the caramelisation of the crisps, adding caramel and fruit notes to a deliciously smooth Kumara Milk Chocolate. 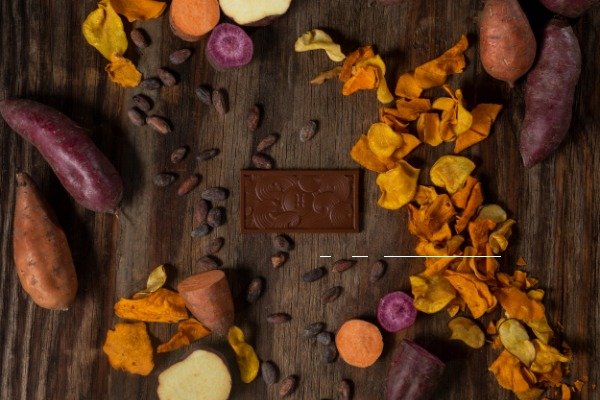 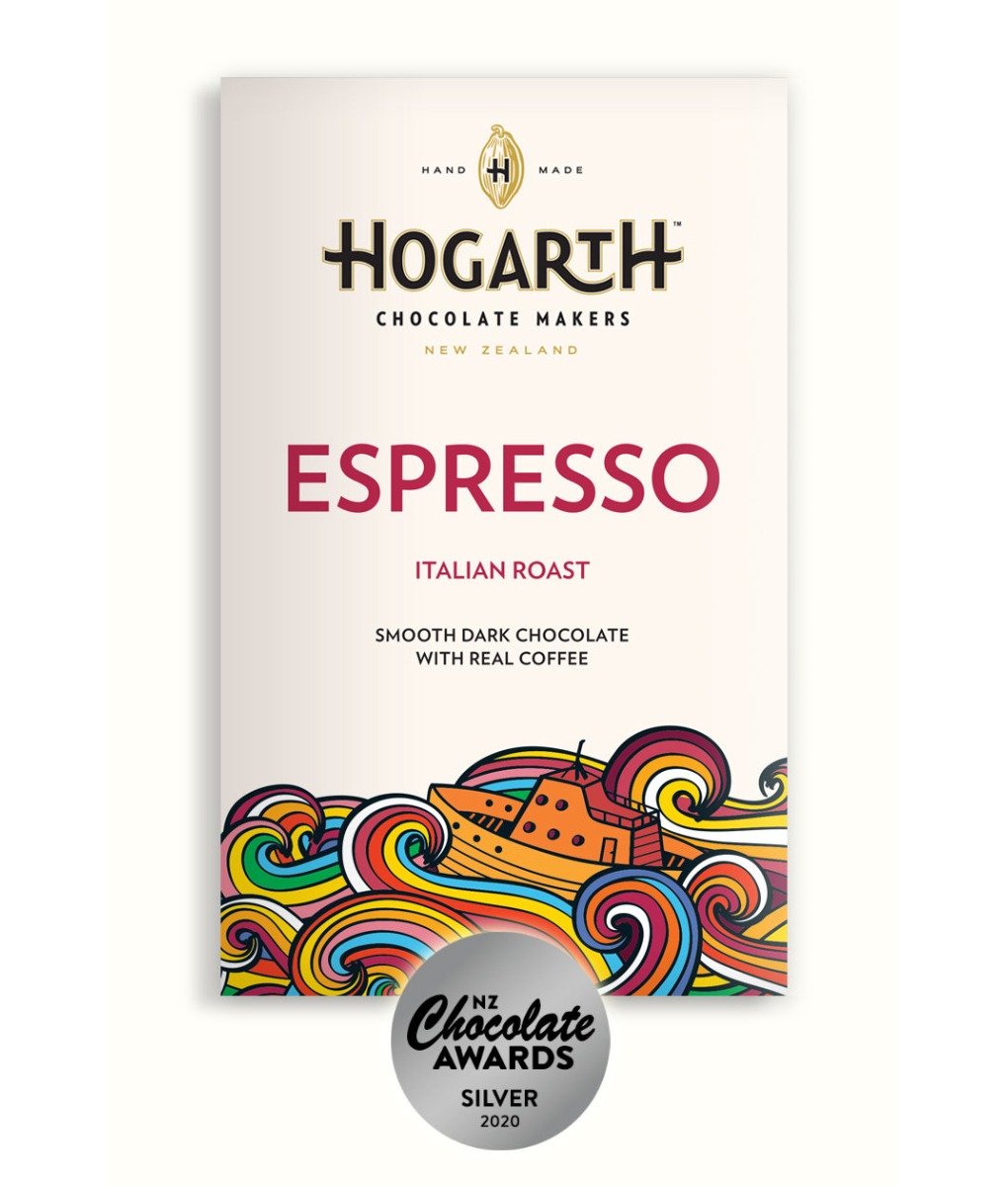 This bar is made of 68% Organic Trinitario cacao beans from Oko Caribe, Dominican Republic, and Pomeroy’s Italian style coffee blend. Nestled in the heart of the cacao rich Duarte province in the Dominican Republic, Oko Caribe is a gem amongst cacao suppliers. Founded in 2006 by Adriano Rodriguez and Gualberto Acebey Torrejon, two professionals with large experience in cocoa production across Latin America. Oko Caribe maintains close relationships with its farmers which receive direct training and funding. 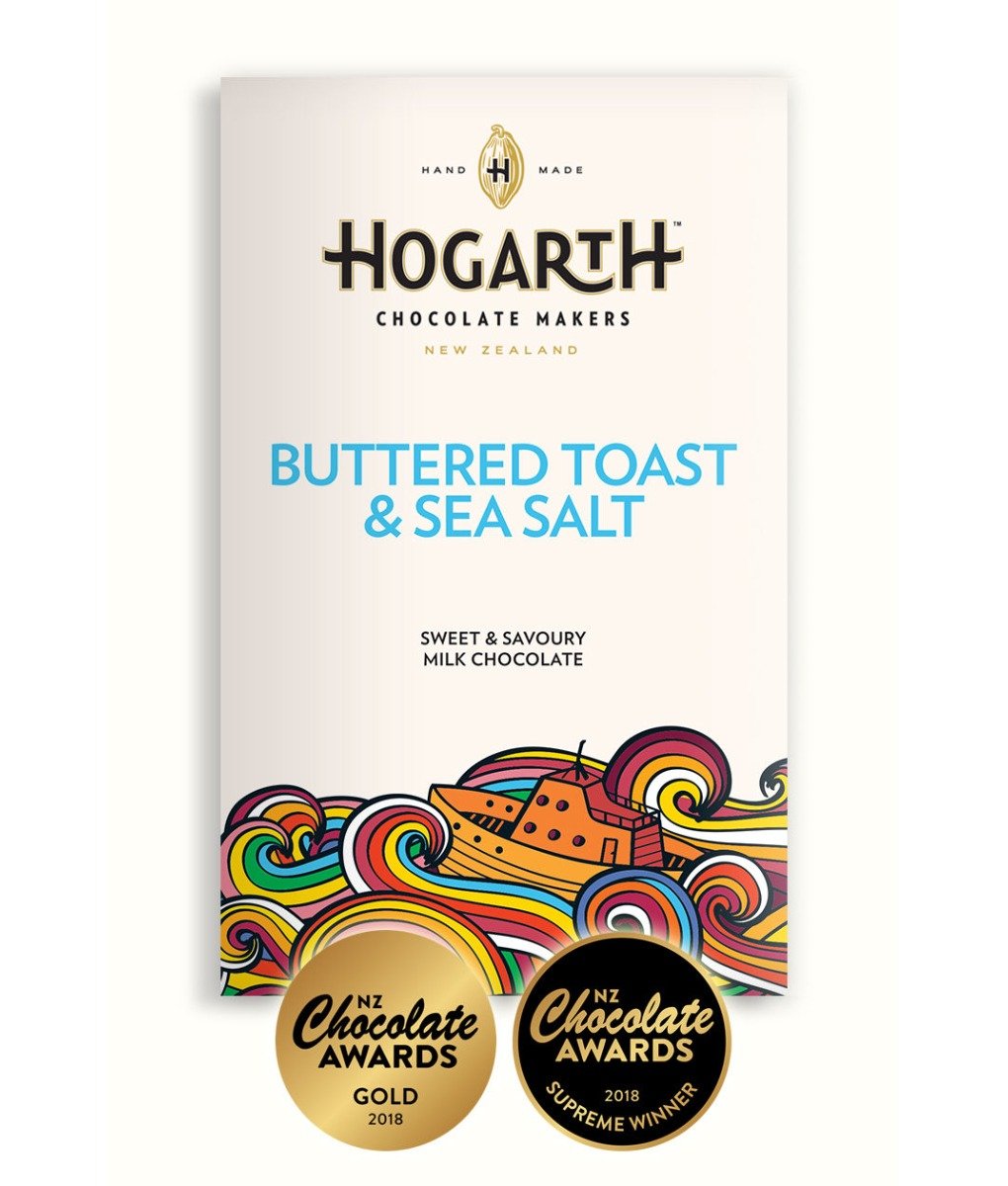 This bar captures the morning ritual of slathering pure New Zealand butter over rye toast. That savoury, salty delicious morning get up and go… is now available in chocolate! Yum.

Hogarth use Vogels Original to flavour this bar, that’s right… there is actual bread in the chocolate! Combining Ecuador cocoa, butter and Vogels Hogarth have created a buttered toast flavoured bar. 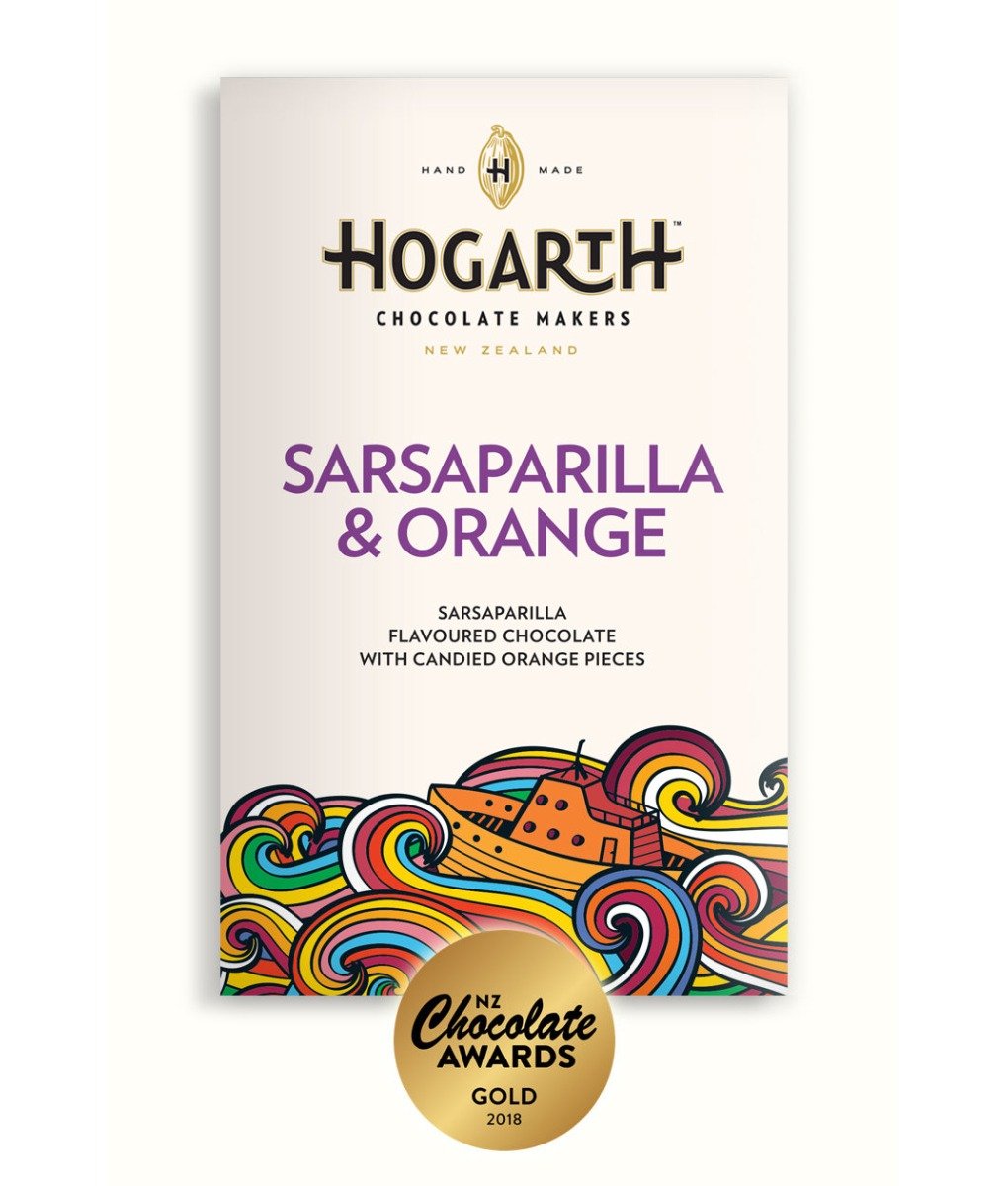 Sarsaparilla, the thirst quenching, slightly spicy tonic, not so common these days… until now!

Here Hogarth have re-created classic Sarsaparilla flavour by combining three spices, sarsaparilla, licorice and ginger with cacao and orange. The resulting chocolate is wonderfully aromatic and refreshing, with candied orange pieces for a sweet zesty bite. 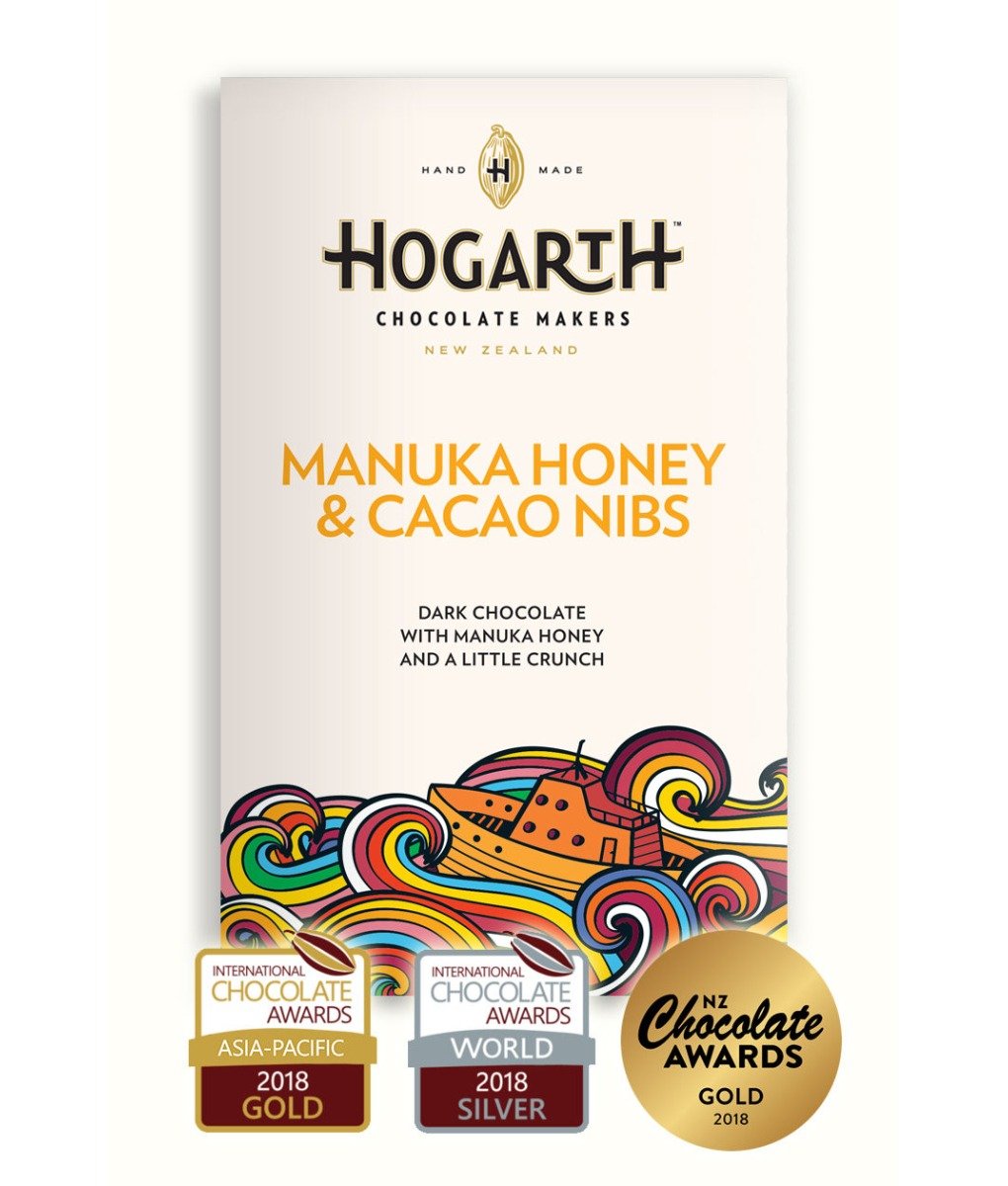 The honey in this bar comes from Hogarth’s good friends at the beautifully named You’re A Honey.

Their bees forage amongst native Manuka in the Western ranges of Nelson, producing honey with an incredible flavour due to the whopping 83% pollen count.

The honey is paired with single origin Peru 66% to make a chocolate with full honey flavour and a little fruit, balancing out the sweetness with bitter, crunchy cacao nibs. 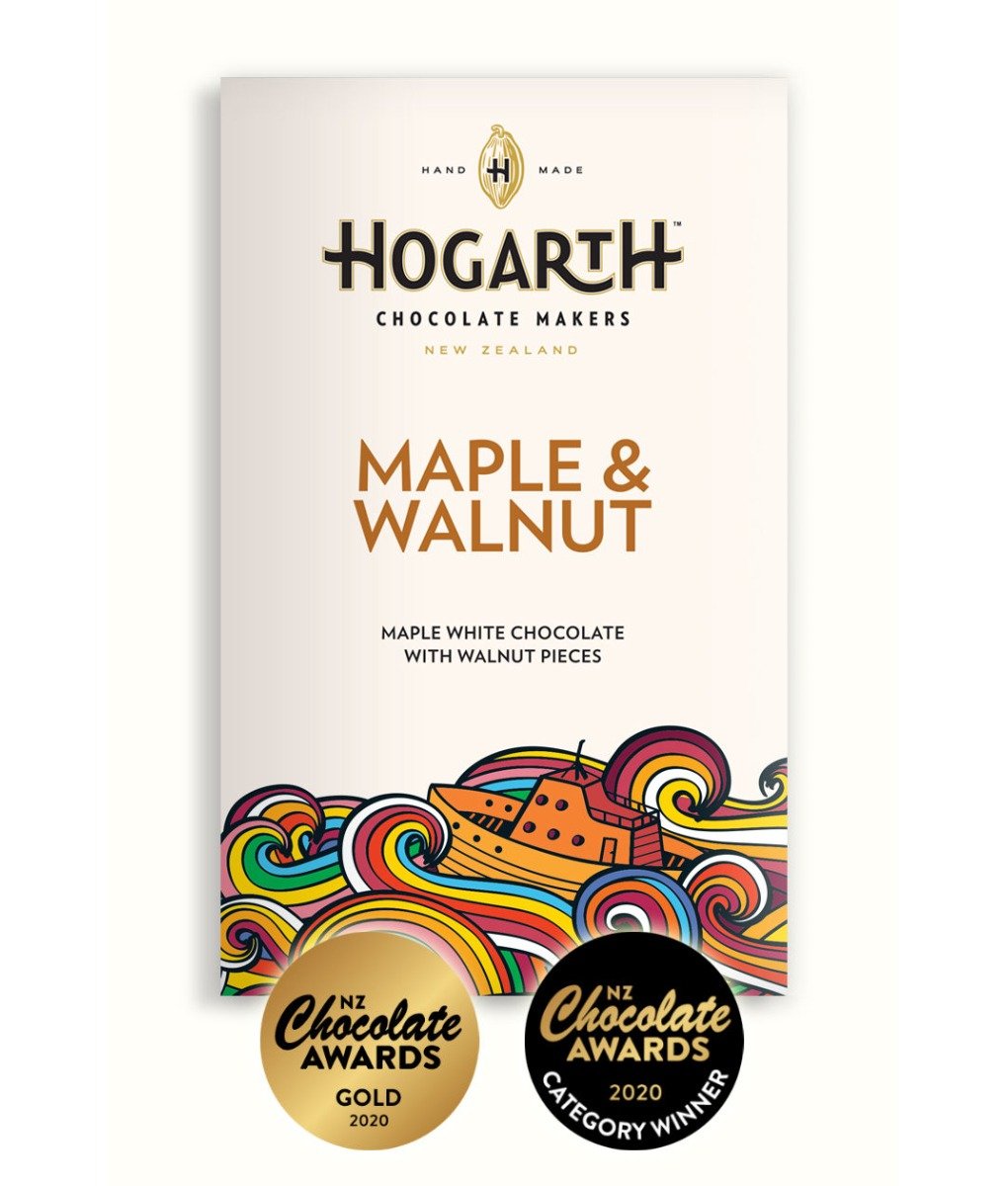 Maple and Walnut, the irresistible classic, is a marriage of sweet and nutty. 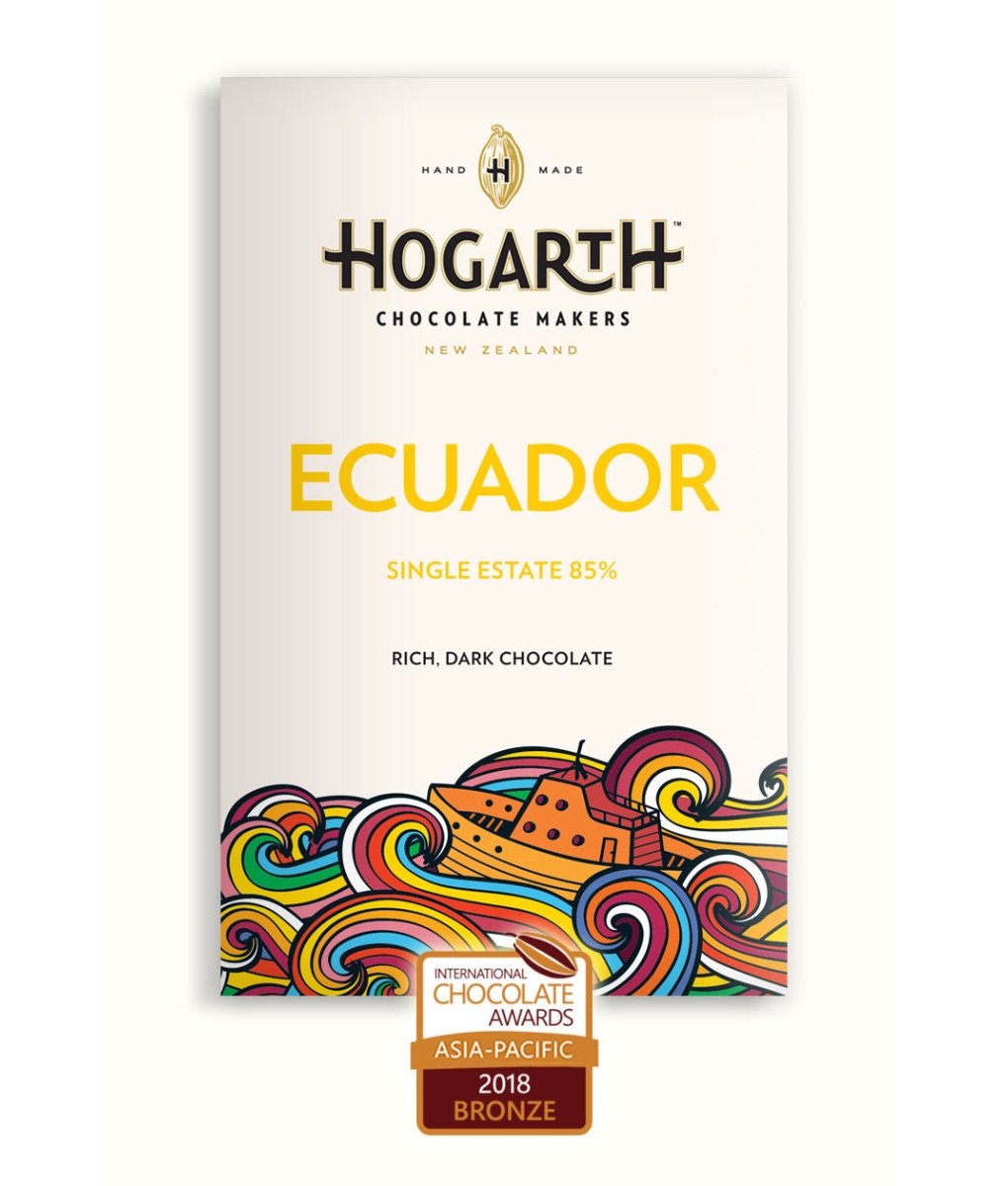 The Arriba Nacional beans from Hacienda Victoria, Ecuador, are lightly fermented, low acidity and have a beautiful delicate flavour and aroma.

Hacienda Victoria is a 500 hectare cocoa plantation about 30 minutes from Guayaquil with ideal climate and superb environmental conditions, along with a sustainable and socially responsible crop management that begins in their nursery and ends in the drying of beans after careful fermentation. It is at Hacienda Victoria that they are bringing the lush forest back to life, bringing back the tradition of growing the world’s best cacao.

This chocolate is low in sugar yet with no bitterness. It has a creamy mouth-feel with notes of cashew and Brazil nuts. 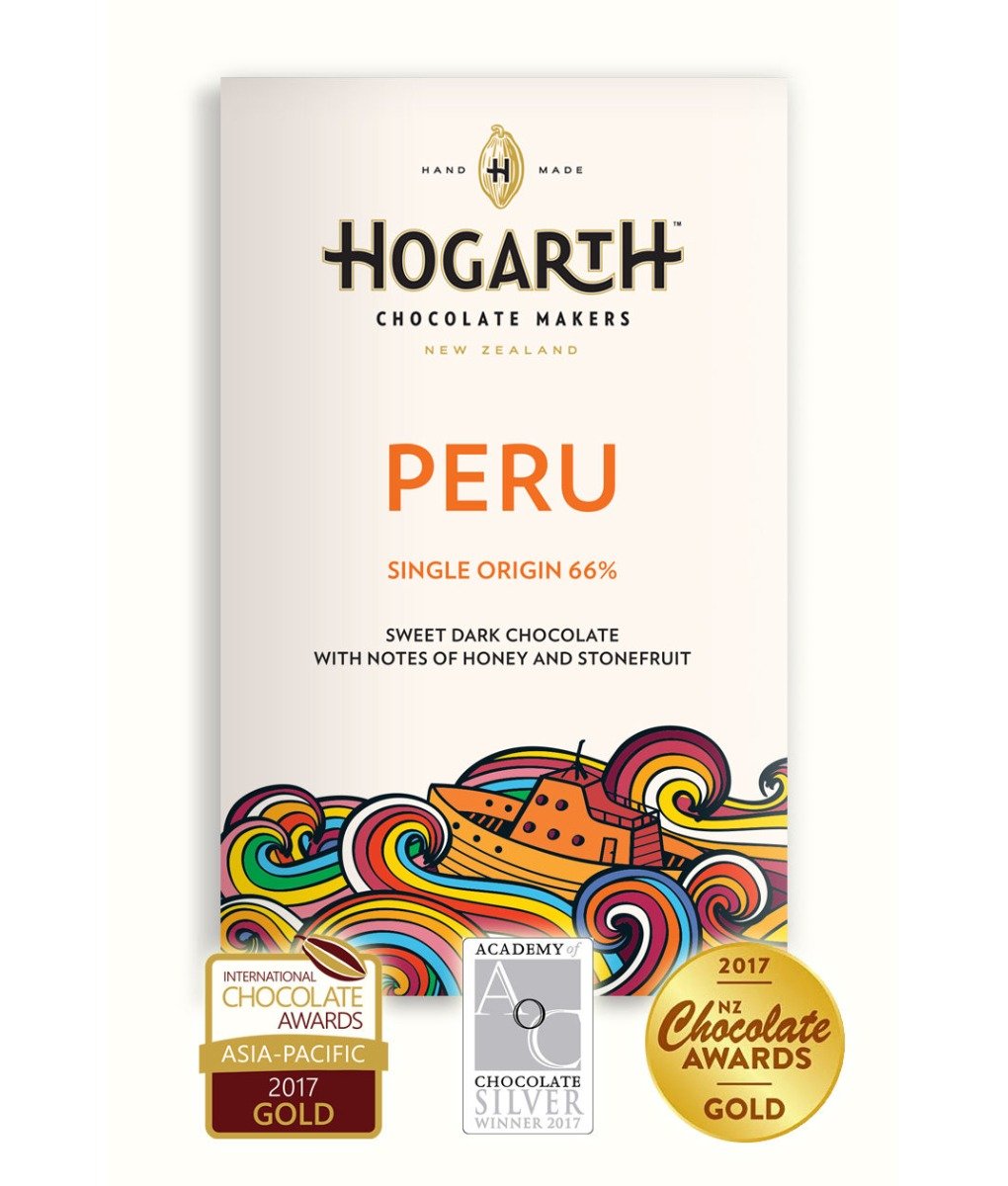 Criollo cacao is the rarest of the three main varieties (Forestero, Trinitario & Criollo). Due to its susceptibility to disease it is not widely cultivated. The beans are light in colour and highly sought after for their delicate fruit and nut flavours.

Norandino Cooperative is an association of small producers that contributes to improving the quality of life of its members, contributes to local socio-economic development, and participates in specialty markets with high quality, and value-added products, preserving the environment, promoting the benefits of group behaviour and gender equity. Norandino works with 7000 cocoa, coffee and sugar cane producers from the Piuran mountains in the northeast of Peru. 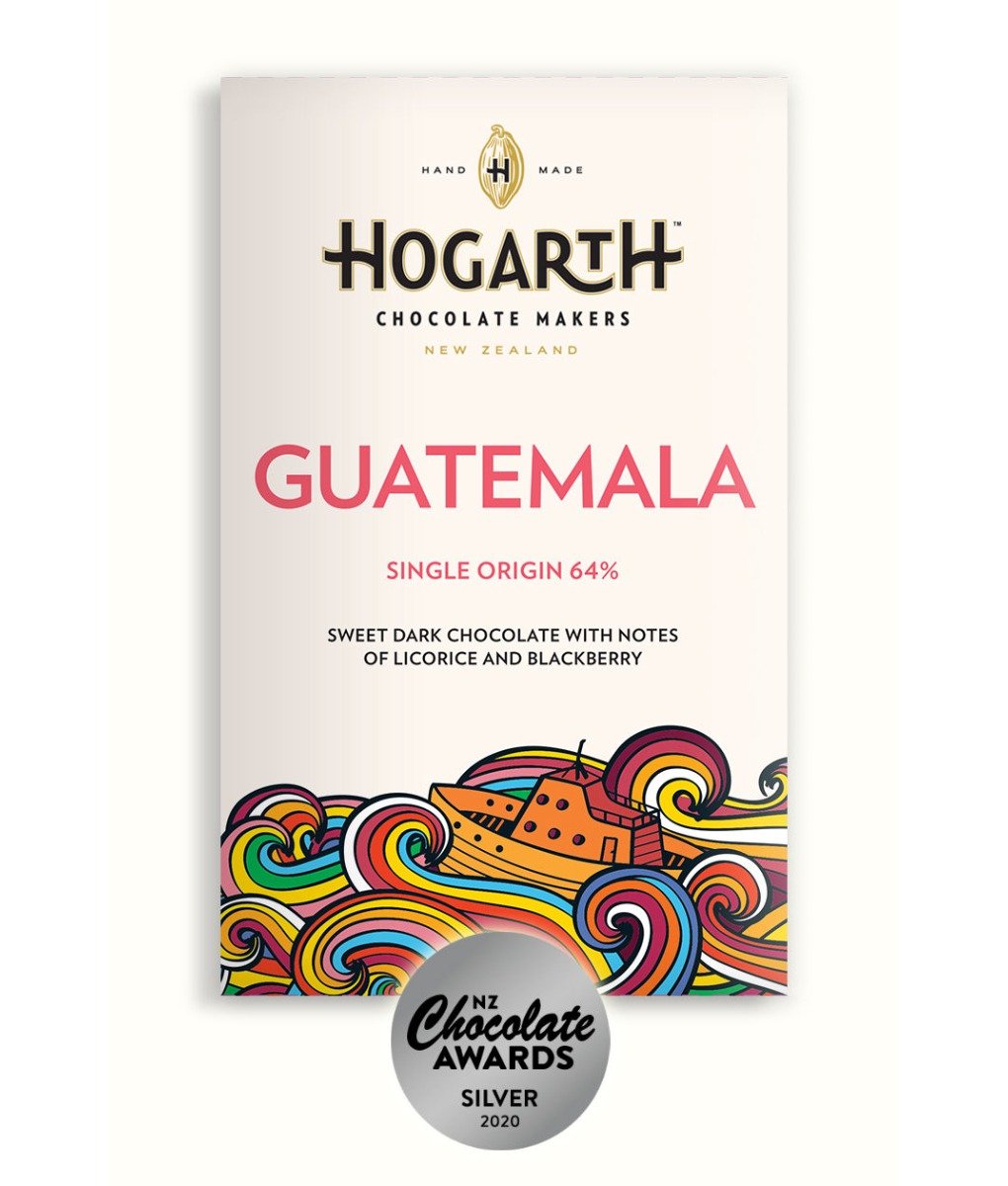 The eco-region Lachua, around lake Lachua is home to Q’eqchi’ Maya families, many of whom live off grid and rely on production of cacao, honey, cardamom, corn and other crops for their livelihoods, all harvested from 200 hectares around the lake.

Hogarth only bought three sacks from Uncommon Cacao back in 2016 and had them frozen immediately to preserve their flavour. Three years later they are finally able to pull them out and make some amazing chocolate. It is estimated we will get around 3000 bars out of these beans which means this will be a Limited Edition.

The chocolate is smooth & creamy with notes of licorice and blackberry.